Apologies if the headline for this post is a little sensational – it’s the broadcaster in me trying to get your attention (DJ’ing/Voiceover/Production was my career for over 20 years until recently.)

As a teenager growing up in England who was really into radio and electronics, I was a regular reader of Practical Wireless.  The issue that contained the schematics and other information on how to build a direct conversion receiver for 80 and 160m captured my attention.  That particular issue became very dog-eared and while I never did build that particular receiver, a few years later, I did build a DSB transceiver for 80M that utilised a direct conversion receiver. It also appeared in the pages of Ham Radio Today and was designed by G3WPO.  The heart of the receiver was the Mini Circuits SBL1-8 double balanced mixer package consisisting of a schottky diode ring.  His company, WPO communications were selling a kit for this radio, so I bought it and was highly impressed with the performance of the receiver. I had heard reports of direct conversion receivers being afflicted with breakthrough from strong broadcast stations, but not with this radio that used 4 matched diodes in the diode ring mixer.  The band sounded clean and pure; of course, much of this probably had to do with the fact that there was very little in the way of filtering, but nevertheless my mind had been opened to the fact that a radio didn’t have to be a superhet to turn in good performance.

Fast forward  almost 30 years and SDR is on my mind. I’ve been aware of Software Defined Radio for a while now but had no direct experience with it until a few weeks ago when I requested a demo version of PowerSDR and some sample IQ files from FlexRadio. Then a week or so later I had a CW QSO with local amateur KE6YX,  during the course of which he mentioned to me that had built a SoftRock receiver, and was waiting for an SDR transceiver kit to arrive in the mail.  I’d heard of the SoftRock, but was only vaguely aware of what it was,  so I looked it up, discovered that it was a series of SDR kits designed and sold by Tony Parks KB9YIG. They vary in capabilities and prices, but the kits that caught my attention were the SoftRock Lite II kits.  These are single band SDR receiver kits for just $10 each.  Shipping is $1, bringing the total cost of the kits to $11.  Any excuses I had to not build my first SDR receiver evaporated!  I ordered a SoftRock Lite II Receiver kit for 40m from Tony’s website.  An hour after I paid using Paypal, I received an e-mail telling me that my order had already shipped.  What service!

A day or two later, the kit arrived in the mail:

A little bag of parts for only $10, and on top of that, I get to solder SMT devices for the first time ever. What fun!  I’m not going to go into detail on the assembly, except to say that there are detailed online instructions.  If you want to take it by step by step, you can build and test each stage as you go along, or you can just stuff all the parts into the board and cross your fingers that it will work (which if you have previous experience with SMT and electrostatically sensitive devices, it probably will.)

I’m not going to tell you that I put it together in an hour or two.  It took me a bit longer than that for a couple of reasons.  Firstly, this was my first time with SMT components, so I built and tested each stage before moving on to the next.  Secondly, I have a habit of soldering a component, then making a cup of coffee, then soldering another component, then looking something up on the internet.  Next thing I know the phone rings, so I talk to a friend for a while……you get the idea!

Finally, I had a finished board.  I connected it to power and an antenna, and started Rocky, the SDR software that is recommended for first-timers like myself.  For some reason, everytime I ran Rocky, my PC rebooted.  Sometimes the program ran for a minute or two, while other times, the reboot started after as little as 10 seconds.  I updated the drivers for my Creative Audigy 2 ZS sound card, which solved the problem. The SoftRock was working, so I came up with a very original idea and put it in an Altoids tin: 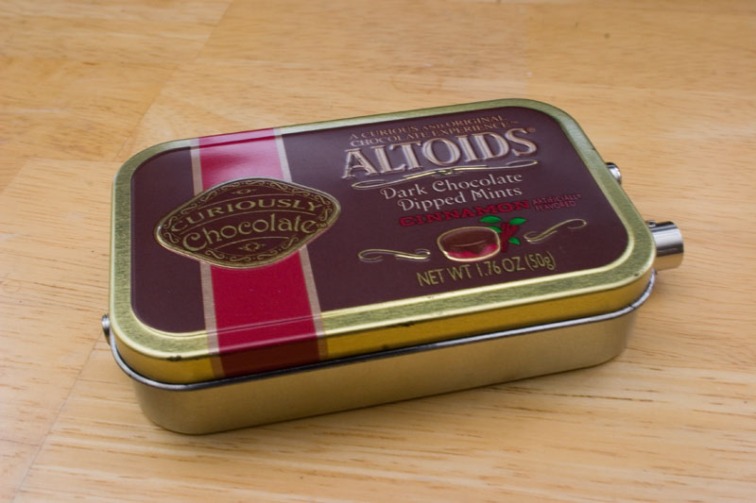 So how does it perform? Well – I need to get an antenna switch so that I can do direct A-B comparisons with my FT-817, but the radio is definitely hearing things, and my guess is that it will hear everything my FT-817 will.  The neat thing is that because it is an SDR receiver, the majority of the signal processing is done in the software.  So far I have used both Rocky, and the M0KGK SDR Decoder software.  My sound card samples at 96KHz, so my receiver covers a 96KHz-wide chunk of the 40m band.  Check out this screenshot from the M0KGK SDR Decoder:

Once you have built a simple SoftRock (or similiar) receiver, there are a number of different programs out there you can use to perform the functions of signal processing and user interface.  Each time you download a different program, or a significant update to an exising program, it’s almost like having a whole new receiver.  With traditional receivers, where the signal processing is performed by the hardware, adding a new function, such as a new mode, or a different filter, involves physical changes to the receiver circuitry.  With an SDR receiver (or transceiver), these functions are performed by the software, so you can just download a new demodulator or filter. Pretty amazing stuff.

I was hoping to be able to use this receiver in conjunction with a simple homebrew CW transmitter, and to be able to monitor my sending directly from the on-air signal.  However, I have noticed that there is a slight delay between the signal being transmitted and being heard by the SoftRock.  I was able to minimize, but not completely eliminate, this delay, by reducing the amount of buffering in the decoding program.  Perhaps a different sound card might help?  I’m wondering if a slight delay is par for the course at this stage in SDR development.

To sum up, if you haven’t given SDR a try yet, KB9YIG’s line of SoftRock receivers give you a very affordable way to get started. He also sells other SDR kits when you want to delve a bit deeper.

Thank you to Dave KE6YX for piquing my interest.

Besides – what else were you planning to do with that Altoids tin?