What’s not to like about a transmitter kit that costs 10 pounds sterling and can get you spotted all over the world under the right band conditions?

For your ten quid, you get this QRSS Transmitter Kit from QRPLabs, designed and manufactured by Hans Summers G0UPL and Stephen Farthing G0XAR:

After reading G4ILO’s account of receiving his kit and how his keyer chip was sent programmed with the callsign G4LIO instead of G4ILO, I was hoping that my chip wouldn’t have any of my call-sign letters transposed also. I breathed a sigh of relief when I saw the paper in which the chip was wrapped with the marking “AA7EE”. Then it dawned on me that my situation was potentially much worse than Julian’s.  Either the last or the first two letters of my callsign could have been transposed by Stephen and I would never know. This uncertainty has the potential to keep me up at nights, but I’m made of pretty strong stuff.

OK, stuff a few parts into holes, wind a few toroids, put it into a food container (one of a package of 4 that I got cheap from Ross Dress For Less) and here we go:

The board is a good quality single sided board.  I find this kind of board just a little (not much) harder to solder to than a double sided board with plated-through holes, the reason being that if you’re used to the the latter, it can be quite easy to put too much solder on your joints (there are fewer places for solder to go). So go easy with the solder folks. Be careful and you’ll be fine.

On firing up the transmitter, I noticed that although I had connected pin 7 of the keyer chip to the +ve supply line, the chip was sending CW at slower than the 6 second dots I was expecting – it looked like 15 or 20 second dots.  A look at the QRPLabs Yahoo Group and I realized that a few others had experienced this problem too.  Pins 5,6 and 7 are used to tell the chip what speed to send your callsign at.  The cure is to ground any unused pins.  If you will be changing the speed regularly, then you can install 10K pull-down resistors on pins 5,6 and 7.  Either approach works. Thank you QRPLabs Yahoo Group!

The signal is surprisingly stable after initial warm-up.  I did find it to drift a little on occasion, though I think these drifts of up to 10Hz were caused by changes in room temperature.  Most of the time, the TX stayed to within a couple of Hz of where I set it. If the temperature of your radio room is thermostatically controlled and room temperature doesn’t vary much, you should be fine.  For anyone thinking of mounting the transmitter outside or in some other non temperature-controlled environment you may need to think about insulating the box, or using some kind of crystal oven.  A bigger problem for me right now is that the trim cap that sets the exact crystal frequency is very sensitive.  It’s important to set your QRSS TX on an unused frequency, so precise frequency-setting to within a few cycles can be important.  It makes no sense to put your signal on top of a strong signal.  In a band segment that is only 100Hz wide it’s worth finding as clear a part of it as possible. The 25pF trim cap and an inductor are in series with the crystal to pull the frequency.  I’m thinking that removing a few turns from the inductor might make the trim cap cover a narrower frequency range, making it easier to set the frequency of operation of the transmitter.

The first night of operation didn’t yield any reports, and I didn’t see myself on any online grabbers, but I don’t know how much power I’m putting out.  I don’t have a QRP power meter and for some reason I can’t get any reading at all from my my home made RF probe.  I wasn’t expecting it to be accurate at these low power levels, but I was expecting some kind of reading.

But this is kind of a moot point anyway.  I don’t know why this didn’t occur to me before, but Spectrum Lab has the capability to send QRSS as well as receive it, so if I get myself a decent QRP power meter (which I have been wanting anyway), I can use my FT-817 with Spectrum Lab to transmit QRSS and can dial down the audio drive to the rig to achieve any power level I want. An added advantage of using software like Spectrum Lab to transmit is that I can make some fancy patterns on the bands by sending Hell.

There are not a lot of good QRP power meters out there.  Various QRP groups (including NorCal) have in the past offered kits but I don’t know of anyone who is offering one now, with the exception of the time-honored Oak Hills Research WM-2 QRP Wattmeter.  For QRP, I like gear that is small, but this watt meter has analog meters, which make the process of adjusting a circuit for maximum power more pleasant than watching a digital readout. Analog meters still have the edge in ease of use when you’re adjusting anything for a peak.

So do you guys know of any other readily available QRP Wattmeters? Does anyone here own an OHR WM-2 and if so, what do you think of it?

Back to QRSS before I end this post. I did have a fun evening and overnight on 30M spotting various stations.  My first few hours listening (watching?) netted me KC7VHS, KE5OFK (who I hope to chat with on 2 meters when he visits the Bay Area in a week or two), W4HBK, W0TJ, and WA5DJJ (who was runing 10mW 955 miles away from me in New Mexico!) I sent e-mails with screen grabs attached to all stations heard and had really nice replies from all but one.

I was excited to see David WA5DJJ’s 10 milliwatt signal. When reading the CW, remember that it is the signal directly above the red lettering, and that you are looking at the top parts of the waveform, not the bottom parts.  It’s a little weak, but perfectly readable, and it is just 10 milliwatts – that’s 0.01 watts – way less power than a flashlight:

David (in Las Cruces, New Mexico) has lowered his signal to 125µW and has already been copied by W4HBK in Gulf Breeze, Florida. Astounding stuff! David has even lowered his output power to 65µW!  I’m not sure if anyone has copied him at that level yet.

Next is Bill W4HBK.  Bill worked for NASA on the Gemini, Mercury, Apollo and Space Shuttle projects and it seemed very appropriate to be sending a weak signal report to a guy who worked an agency who knew a thing or two about even weaker signals. Bill has a particularly good grabber online at http://www.ohr.com/wattmeter.htm As well as a regular 10 minute scan, he has a 4 hour scan.  If you know the exact frequency of your signal you can look for it on the 4 hour scan to identify a time when propagation was best, then go to the archive of the 10 minute scans to verify that he was receiving your signal.  Brilliant  – services like this are very helpful to experimenters. This is what Bill’s 250mW signal to a 43 foot vertical with a good ground in Florida looks like in California – 2062 miles away. Just above Bill is Larry WB3ANQ’s 200mW “snake” into a Force 12 40XK vertical dipole: 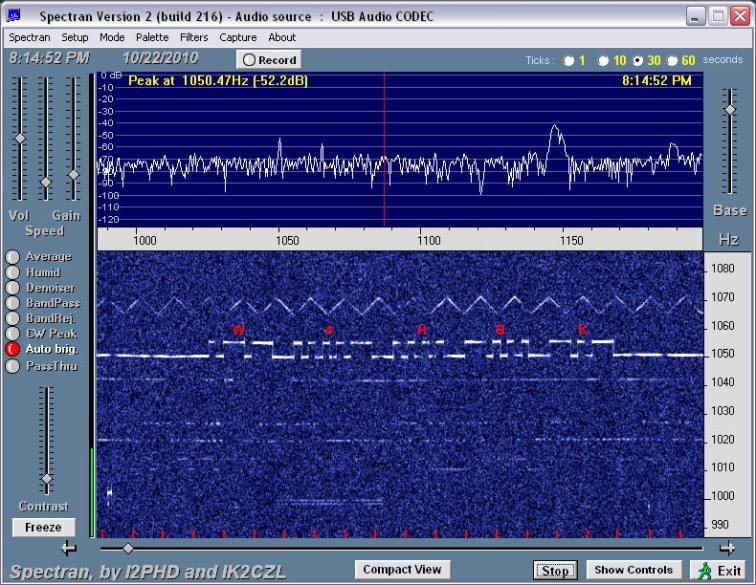 To anyone who thinks that amateur radio is just a bunch of old guys chatting to each other and has lost it’s experimental nature, what is going on in the general area of weak signals is a perfect example that the pioneering spirit is alive and well. Joe Taylor K1JT has worked wonders with WSJT and WSPR.  JT65 has made it conceivable that with a fairly modest station, I could get to work moonbounce one day.  There is a hardcore of experimenters in the QRSS community who put a great deal of effort into building very stable transmitters in order to have their weak signals copied down to lower and lower levels. It’s fun to see this all activity going on.

The next projects at AA7EE will most likely be procuring (or building) a QRP wattmeter, and designing some coaxial traps to turn my 30M inverted vee dipole into a trap dipoole for 40, 30 and 20.

But right now, I just ate dinner and need a nap.